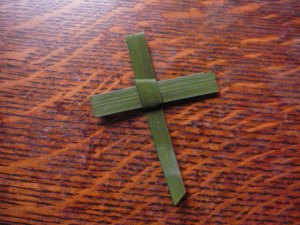 We enter Holy Week and the story is not new to us.  From our childhoods we have known the sequence – the palm branches being waved and Jesus riding into Jerusalem on a donkey – but within days a change in mood – Jesus the threat to the religious authorities – Jesus overturning tables in the temple and driving out the money changers – Jesus weeping over Jerusalem – the authorities cooking up charges – Judas trading information for silver – the washing of the feet and Last Supper in the upper room – the Garden of Gethsemane – the sleeping disciples – the arrest – Peter’s denial – Herod – Pilate – the crowd calling for Barabbas to be freed – the whipping – Pilate washing his hands of the whole thing – the crucifixion – the burial – and the third day.
And in the middle of this, Jesus… living out what he taught – Jesus, being found in human form… humbled himself and became obedient to the point of death – even death on a cross.
In the middle of the betrayal, denial, fleeing disciples, trumped-up charges, corrupt leadership, and the inevitable scapegoating, is Jesus.  Innocence attacked. Truth sidelined. Love rejected.  Life wasted.
We would wish that this sorry story was the end of such sequences.  We would wish that the resurrection meant a once and for all end to violence and hate and corruption – that the kingdom of God revealed by Jesus would take root in the hearts of all people and God’s way of being would be the reality for all.
But we know that the kingdom come is also a kingdom coming – not here in its fullness even though we are invited and enabled to live into its fullness now.
No, the sorry cycle of betrayal, denial, fleeing disciples, trumped-up charges, corrupt leadership, and scapegoating continues on. It is as if the cast of Easter reappears in an endless cycle in the human story.  And we get caught up in it as participants, sometimes intentionally and often unknowingly.
For we know of the corrupting powers at work in our lives – leaders who turn on their people, people we trusted betraying us, institutions set up to enable a cohesive society becoming forces that begin to oppress us, and once loyal friends gossiping behind our backs.
We know of untruths being peddled as dogma – we know of the truth being twisted for individual gain – and we know of people being scape-goated.  And sometimes we participate in this willingly.
Jesus wasn’t the first or the last to be a scapegoat was he?  It is easy to pull out a Saddam Hussein or a Colonel Gaddafi every year or two and vilify them – they are easy targets and of course they have done many things to oppress their people.  It is easy to dismiss them, but a much harder task to scrutinise the systems that created space for their oppressive rules.  Few seem interested in questioning the politics of arms sales and backroom deals that enabled these dictators to emerge (like who exactly sold the arms used against the Libyans to their government?).  Few seem prepared to admit their hand in supporting these regimes while choosing to turn a blind eye to the myriad of horrible things that have been dished out on innocent people for years and years.

No, just hand over the scapegoat when it suits.  Give us a Bernie Madoff or two and we can forgive the greed of a whole host of practices that led to the latest global financial crisis.  (or in New Zealand Allan Hubbard who, whatever he has or has not done, does not fit the usual profile of a scapegoat!)

Let’s label someone as the black-sheep in the family and lump on him or her all of our collective derision so that the not so good stuff in the rest of us can be brushed over.

Let’s sack the coach when the team play badly.

Let’s set aside people from some other nationalities to be the focus of our strange need for one-upmanship and superiority: Moslems, the Maoris, the Asians… are we really any different from those who set up apartheid in South Africa – we may not have gone so far as they did but the seeds of hate are there.  Why do we do this?

Holy Week unfolds before us, giving us opportunity to reflect again on the worst of what humanity can do and be, but also on what Jesus, the best of humanity, offered and offers.

Jesus shows us that with God, betrayal, denial and death does not have the last word.  The corrupt and oppressive cycles of death in human life that seem to dominate us, do not need to continue.  We are Easter people called and enabled to live by another code – the kingdom of God code – always life – always hope – always truth – always love.

Holy Week is a time for us to watch and walk alongside Jesus and reflect on who we are, what we are about, and where we are going.

a little of what has been happening

There's more in you!

Photography is the Art of Exposing your Soul

JOURNEY TO PENUEL: Wrestling to See the Face of God

Beautiful photos of hiking and other outdoor adventures.

Musings In Self Solitude

Where my writing is as random as my imagination.

A Word in Your Ear

Stories and Photographs of my travels, Tales of friends, family, animals and my life

The Village Church and Community Centre

There was – and always has been – another tradition of politics, a tradition based on the simple idea that we have a stake in one another, and that what binds us together is greater than what drives us apart (Barack Obama - 'The audacity of hope')

Travel, culture and lifestyle experienced on my adventures around the world. All photos taken by me. Instagram: @colorspark

Life Through The Viewfinder

Travel photography for the uninitiated....